Some time ago, october 2015, my network share died. How can this be happened, simply by being stupid… I was having an western digital 1 TB passport attached to my Assus router mounted behind the wall without a ventilation source.

Because of the loss of all my photos it was time to upgrade to a more sophisticated solution, my own NAS. Googling a little bit I saw different solutions from Synology or QNAP but price was more that I was willing to spend on start to compensate the loss of my external drive.

I decided to start with something cheap ($256.97 @ PCPartPicker part list), powerful (2565 @ cpubenchmark.net) and low power consumption.

I chose ubuntu as a server OS over freenas because it was more familiar to me and thought it will be easier to configure. I installed ubuntu 14.04 on an USB drive and use an 750GB old drive as a storage, only to discover later that configuring AMD Radeon proprietary driver fglrx on ubuntu 14.04 would be a pain but once I did it the performance was great and never upgraded the kernel. As a sofware I used Samba, Transmission as a torrent client, kodi with autostart on lightdm, apache, mysql and some web apps. Few months later to improve performance I moved OS partition from USB drive to an 100GB old notebook drive.

After one year, october 2016, I start looking for an upgrade to the server and chose two new drives to use as a RAID storage and a SSD m.2 on a PCIE card for the OS partition (PCPartPicker part list).

I installed ubuntu 16.04 and the performance is great, also AMD Radeon driver works out of the box. 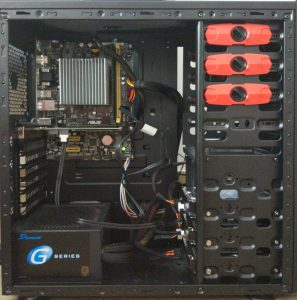 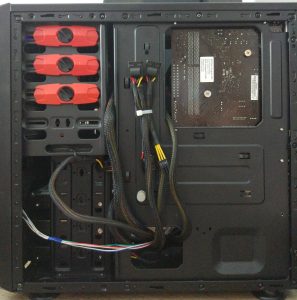